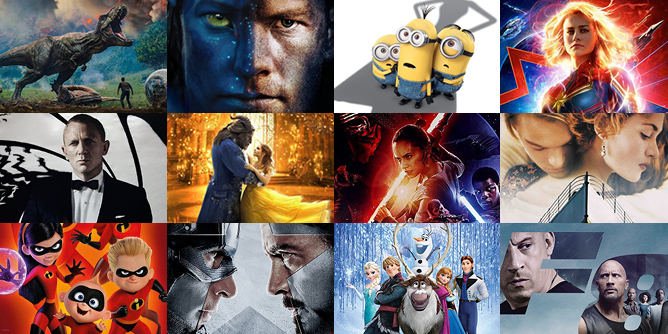 They say the only two things that are certain, are death and taxes. Well, here’s two more: movie prices will continue to rise, and movie box office records will continue to be shattered. Of the top 25 highest grossing movies, 19 are from the last six years, only two predate 2010, and only one predates 2000. This time next year, our list may look totally different.

So here, in honor of the Academy Awards this month, and our 25th anniversary, we are sharing the 25 highest grossing movies of all time as of … today.

21. Minions. This is the first of seven animated movies on this list.

19. The Fate of the Furious

17. Beauty and the Beast

14. Star Wars: The Last Jedi. Sixteen of these movies are sequels (or the third, or fourth, or this case, the 8th, of a series)

13. Harry Potter and the Deathly Hallows–Part 2

5. Avengers: Infinity War. The first movie on our list to crack $2 billion in total box office, although it’s only the second highest grossing Avengers movie.

1. Avengers Endgame. Although, if you adjust for inflation, they are only #5, far behind the #1, Gone with the Wind.