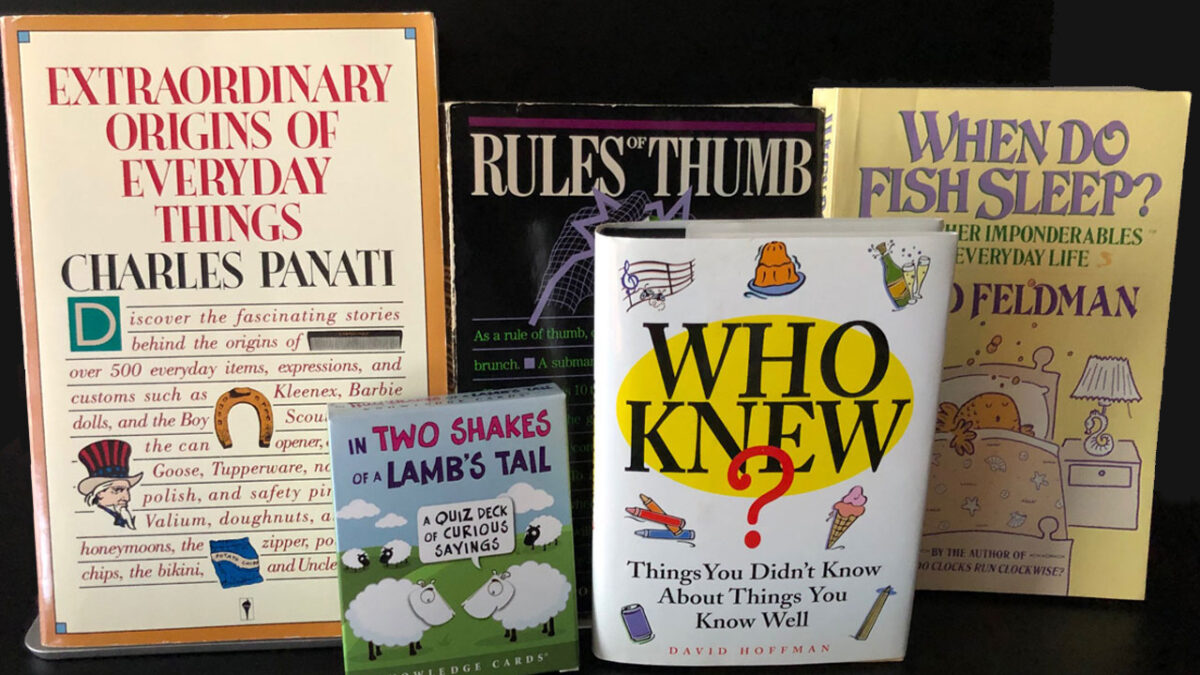 Let’s take a little detour in the Dog Days of Summer and share some fun and facts with a little game I like to call Bookshelf Roulette!

You veterans of the Mill are familiar, but if you’re a newbie, the challenge goes like this:

Since we are primarily still working remotely, I have to rely on some books here at the home office. I luckily have a shelf full of books that aren’t very deep emotionally, no long tomes of historical fiction, just some surface knowledge to make you look smart at the dinner table.

Portrait artist James Whistler decided to paint his mother when the person who had scheduled an appointment with him failed to show.

—Who Knew? Things You Didn’t Know About Things You Know Well
David Hoffman

The average dairy farm needs about three acres of land per cow for buildings, crops and pasture.

Why do golf balls have dimples? In 1908 a man named Taylor patented this cover design. Dimples provide greater aerodynamic lift and consistency of flight than a smooth ball. Although golfers love to feign that they are interested in accuracy, they lust after power: Dimpled golf balls travel farther, as well as straighter, than smooth balls.

—When Do Fish Sleep? And Other Imponderables of Everyday Life
David Feldman

Cool As a Cucumber. The belief that cucumbers are cool or cold has been held for centuries. Apparently, the inside of a cucumber on a hot day can be as much as twenty degrees cooler than the ambient temperature. It evolved into a positive vein, meaning calm, composed and imperturbable.

An emblem of rank and distinction, the umbrella originated in Mesopotamia 3,400 years ago as an extension of the fan. For these early umbrellas did not protect Mesopotamians from rain, a rarity in their desert land, but from harsh sun. It wasn’t until Roman women started using them for rain in the first century A.D. that they performed as we generally know them.

Did it! Think of your mother, while driving by cow pastures, wishing you were golfing, but remaining cucumber cool, before it rains. Sounds like summer to me.

“Good sense about trivialities is better than nonsense about things that matter.”
—Max Beerbohm